The 1847 collapse of the Dee Bridge is covered in great detail by Henry Petroski in Success Syndrome: Collapse of the Dee Bridge, in Civil Engineering ASCE, Vol. 64, No. 4, April 1994, pp. 52-55, and in Design Paradigms: Case Histories of Error and Judgment in Engineering. (1994) Cambridge University Press, New York, NY.  The case is also discussed briefly in Chapter 6 of Beyond Failure: Forensic Case Studies for Civil Engineers.

The bridge was deigned by the noted engineer Robert Stephenson.  Because cast iron is weaker in tension than in compression, the tension flanges of girders were larger than compression flanges by a ratio of 16:3, following the ratio of material strengths.  The Dee Bridge had a relatively long simple span for the day of roughly 29 m (95 ft).  The girder cross section is shown in figure 6-14.  The bridge was also designed with a relatively low factor of safety of 1.5.

The bridge was completed in September 1846.  In May 1847, 125 mm (5 in) of ballast was added on top of the wooden decking, in part to reduce the risk of fire from the sparks of the locomotives.  When the first train crossed the bridge after the installation of the ballast, the bridge sank beneath it.  The locomotive reached safety, but five cars fell into the river.  Five people were killed and 18 were injured.

The most likely cause of failure was a torsional buckling instability to which the bridge girders were predisposed by the compressive loads introduced by the eccentric diagonal tie rods on the girder  (Petroski, 1994, p. 90).  In effect, the top flange of the girder became a column under the compressive force and buckled out of plane, causing the collapse. 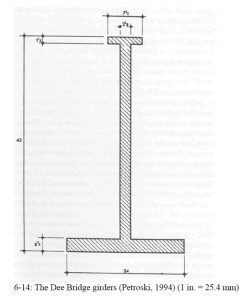