Like the Point Pleasant Bridge, the Mianus River Bridge on the Connecticut Turnpike (I-95) had collapsed after decades of service. The bridge’s skewed simple spans were suspended on pins and hangers. Ten years before the accident, the bridge’s storm drains had been paved over. This paving allowed water, silt, and dirt to drop directly onto the hanger assembly and accelerate corrosion. The end caps that were intended to keep the hangers from slipping off the pins were only 7.5 mm (0.3 in.) thick (Feld and Carper 1997, pp. 145-148). The NTSB report concluded that the collapse of the bridge probably occurred because of “deficiencies in the State of Connecticut’s bridge safety inspection and bridge maintenance program” (NTSB 1983). Many similar bridges were retrofitted to prevent similar collapses (Levy and Salvadori 1992, p. 148).

The key reference for this case is the NTSB (1983) highway accident report Collapse of Suspended Span of Route 95 Highway Bridge over the Mianus River, Greenwich, Connecticut, June 28, 1983. The case is also discussed in Chapter 9 of Levy and Salvadori (1992). This case study is featured in the History Channel’s Modern Marvels Engineering Disasters 8 videotape and DVD.

History of the turnpike https://www.nycroads.com/roads/ct-turnpike/

Image from US FHWA http://www.tfhrc.gov/pubrds/summer95/p95su23.htm 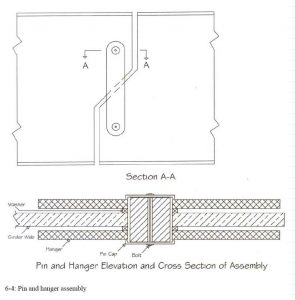