On August 1, 2007, an eight-lane, three-span section of the I-35W Bridge across the Mississippi River in downtown Minneapolis collapsed at approximately 6:00 p.m. It was crowded with rush hour traffic. The final death toll was 13. The bridge was the main north-south route through the city. Figure 6-11 shows the bridge before the collapse. Eyewitness reports suggested that a span at the south end collapsed first and that the failure propagated across the bridge to the other two spans in turn.

Much of the wreckage remained above the water, but about 50 vehicles with their occupants went into the river. At the time, repairs were being made to the bridge deck, guardrails, and lights. Figure 6-12 shows the wreckage of the collapsed bridge.

The National Transportation Safety Board (NTSB) immediately began an investigation, as with most bridge collapses. The investigation team arrived the day after the collapse.

As of summer 2008, the cause of the I-35W Bridge collapse remains under investigation, and the final reports have yet to be written. However, considerable work has been done, and a critical design flaw that may well have been the cause of the collapse has been identified. The U10 and L11 gusset plates, shown in Fig. 6-13, were only about 13 mm (1/2 in.) thick when they should have been 25 mm (1 in.) thick.

At the time of the collapse, the contractor working on the bridge had stockpiled aggregates and heavy construction equipment on the site. Careful reconstruction of the traffic and other loadings by the Federal Highway Administration (FHWA) and others has found that the U10 and L11 gusset plates were considerably overstressed at the time of the collapse (Holt and Hartmann 2008).

The NTSB has posted the FHWA Holt and Hartmann (2008) report and other reports, illustrations, and documents on a website at http://www.ntsb.gov/dockets/Highway/HWY07MH024/default.htm. 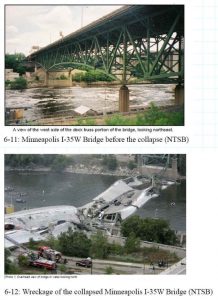