On December 15, 1967, the bridge collapsed while handling heavy traffic and killed 46 people. This accident changed the nation’s view of bridges across the country.  The government ultimately changed the way bridges were inspected to ensure safety and functionality.

The bridge was completed in 1928. The General Contracting Company of Pittsburgh, Pennsylvania constructed the piers. The American Bridge Company of Pittsburgh built the bridge. It was a unique design due to the use of high-tension eye-bar chains, a unique anchorage system, and the use of rocker towers. The eye-bars were two force bar members with rounded eyes at each end. Because bedrock was at a great depth, piles were octagonal shapes of reinforced concrete. The Anchorage consisted of reinforced concrete troughs that were filled with soil and concrete. This substructure supported the bridge towers, which were joined by dowel rods. This connection allowed for a flexible connection that was designed to shift under different loads on the tower, and as the length of the chains changed due to temperature influences. This type of design was only used in one other bridge in the United States the St. Marys Bridge in West Virginia, also spanning the Ohio River.  Although not integral to the Florianopolis truss design concept, the Point Pleasant, and St. Marys bridges introduced the use of high-strength, heat-treated carbon steel eyebars to the U.S.

The key lesson from the Point Pleasant Bridge failure is the dangerous interaction between stress concentrations and fatigue.  The small built in eyebar flaw, subjected to many load cycles over four decades, led to a sudden and rapid crack propagation through the eyebar.

Another lesson is the value of structural redundancy.  The eyebar connection was not redundant.  Since it was composed only of two pairs of eyebars, the failure of one eyebar allowed the entire connection to rotate and separate.  In contrast, when the Tacoma NarrowsBridge was torn apart by the wind, 500 of 8,700 wires in the suspension cables fractured but the cables as a whole survived.  At Florianopolis, Steinman had thickened the heads of the eyebars and used four rather than two bars per link.  However, these safety features were not used at Point Pleasant (Wearne 2000 pp. 56-58).

Furthermore, the structure as a whole was also not redundant.  The loss of any one structural element would lead to a complete loss of the bridge.  With the failure of the Tacoma Narrows Bridge, the towers were bent but stayed up, and the side spans of the bridge remained after the center span fell into the water.  In contrast, because the Point Pleasant Bridge towers were supported on rockers at the bottom, they toppled over and all three spans were lost.

This case is discussed in Chapter 3 of the book Beyond Failure: Forensic Case Studies for Civil Engineers, Delatte, Norbert J., ASCE Press.  The National Transportation Safety Board (NTSB) Highway Accident Report Collapse of U.S. 35 Highway Bridge (NTSB 1970) provides a thorough discussion of the failure.  Lichtenstein (1993) also provides an excellent review.  The case is also discussed by Levy and Salvadori (1992) and Wearne (2000, pp. 45 -58).  This case study is featured on the History Channel Modern Marvels Engineering Disasters 4 videotape/DVD.

Image from US FHWA http://www.tfhrc.gov/pubrds/summer95/p95su23.htm 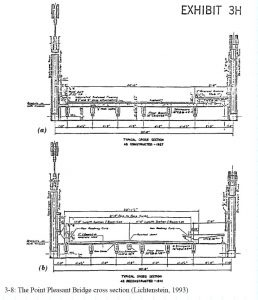