Yet another formwork collapse blamed on inadequately cured concrete occurred at Bailey’s Crossroads, Virginia, in March 1973.  Fourteen workers were killed and thirty were injured.  Shores were removed between the 22nd and 23rd floors of the building while concrete was being placed on the 24th.  The collapse tore a sixty-foot wide gap through the building all the way to the ground.  The concrete, when tested, turned out to be well below its expected strength.  The floor slab failed in punching shear at the columns (Ross 1984, Kaminetzky 1991, Feld and Carper 1997). 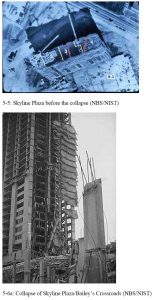 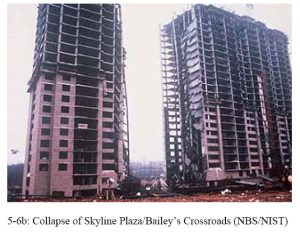