Extreme events, such as earthquakes, test structures near their ultimate capacity and sometimes lead to destruction. Explosions, whether intentional or accidental, do the same thing. On April 19, 1995, a truck bomb tore through the facade of the Murrah Federal Building in Oklahoma City. The blast destroyed a significant portion of the structure, killing 169 people. This event was a classic example of what is known as progressive collapse.

The Murrah Building was designed in 1974 and opened three years later. It conformed to all of the structural codes of the time (Wearne 2000, p. 117).  This case led to a shift in philosophy in structural design. Before this attack, it was generally thought that special detailing of reinforced concrete construction was necessary only in areas with significant seismic hazard.

Hinman and Hammond (1997, p. 34) recommended that reinforced concrete structures subject to blast and similar threats be designed and detailed with alternate load paths and with continuous top slab reinforcement. Columns, beams, and girders should have ties to confine the concrete and provide ductility. Reinforcement bars should be properly anchored. Essentially, seismic design and detailing should be used to provide structural ductility and redundancy.

One key reference is Osteraas (2006). The comprehensive work on the engineering aspects of the Oklahoma City bombing attack is Lessons from the Oklahoma City Bombing: Defensive Design Techniques, written by E. E. Hinman and D. J. Hammond (1997). This document has become an important reference for developing building designs that are more resistant to this type of attack. The case is also discussed in Chapter 6 of Wearne (2000, pp. 117-135). 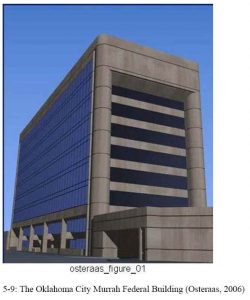 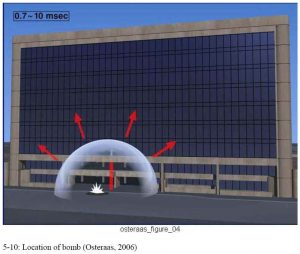 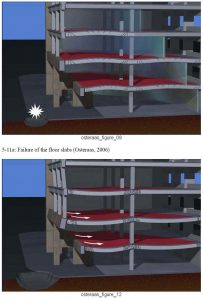 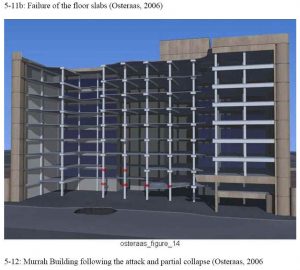