The Pentagon terrorist attack of September 11, 2001, provides another case study of reinforced concrete building performance under extreme loading. The Pentagon performed quite well during the event, and as a result, the damage was localized to the area of immediate impact.

At 9:38 a.m. on September 11, 2001, a hijacked Boeing 757-200 airliner was deliberately crashed into the building. The impact hit the building about 43 m (140 ft) to the south of a boundary between the renovated section of the building and the next section scheduled for renovation. The aircraft continued into the section not yet renovated. The impact and fire killed the 64 people aboard the aircraft and 125 people in the building (Mlakar et al. 2003, p. 4). 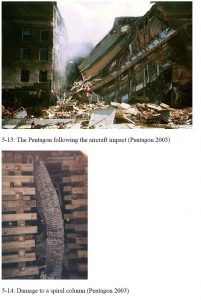