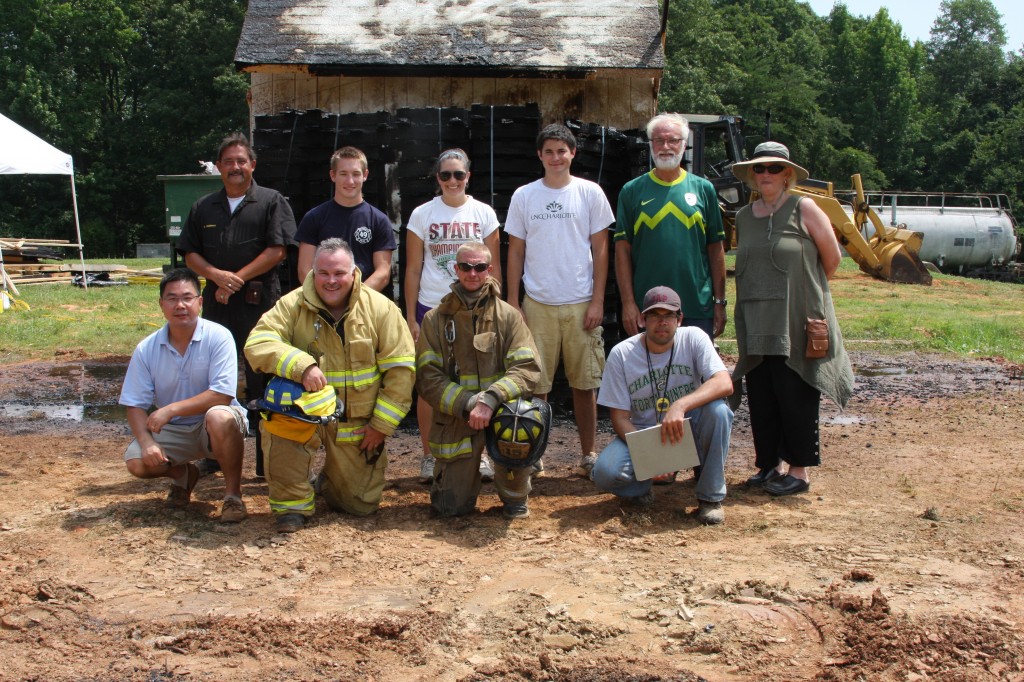 Welcome to the home page for the Effectiveness of Pre-Applied Wetting Agents in Prevention of Urban Wildland Interface Fires research project.

This project was funded through the Department of Homeland Security, Assistance to Firefighters – Fire Prevention and Safety (Performance Period 8/22/08-8/21/11)

Here you will find information on the research project that we hope is helpful to you and your endeavors in dealing with the Wildland Urban Interface.

The Effectiveness of Pre-Applied Wetting Agents in Prevention of UWI Fires project was funded by the Department of Homeland Security through the Assistance to Firefighters grant in Fire Prevention and Safety.

Various mitigation approaches that have been developed rely on the creation of defensible space around structures, and recently on the use of ignition-resistant building materials for the outside of structures.  The success of this approach depends on the degree of compliance with regulations, maintenance of the defensible space, the presence of firefighters, and the availability of suppressants at the time of the fire.  Also, the regulation requirements vary by area, and some requirements (ignitability of building materials) only apply to new structures.  In many areas, the requirement for the creation of defensible space is not popular because residents do not want to modify the natural environment and landscaping around their structures.

A dangerous situation for firefighters can be caused by a significant difference between the effects of flame radiant exposure on wood and other external building materials and humans.  Humans can feel pain or get burned quickly from relatively low radiation exposures (6.4 kW/m2 causes pain on exposed skin after 8 seconds [5], and 7 kW/m2 is the maximum estimated exposure for a firefighter wearing wildland firefighting clothing and head and neck protection over a period of approximately 90 seconds [6]).  Siding and roofing materials typically ignite at much higher radiation exposures, and at much higher exposure times (piloted wood ignition typically occurs at flux exposures of about 14 -18 kW/m2, and at times longer than 180 seconds [7]).  Therefore, structural firefighters can easily get harmed when attempting to prevent homes from igniting.

In some cases, the use of pre-wetting of vegetation, dead fuels, and structures by using water (through sprinkler systems), foams, and fire-blocking gels (gels) has been found effective for preventing the spread of WUI fires to structures and ignition of structures [8].  Also, pre-wetting has been recommended [9, 10] and used [11, 12] during recent WUI fires.  Previous experience has demonstrated that wetting agents and systems are capable of protecting structures in landscaped WUI environments and safeguarding firefighters by creating a wide enough space by sufficiently wetting dead and live fuels in the space so that the structures cannot be ignited or the spread of flames can be prevented.

[1] Separate statistics for WUI fires is not available.

Correct application of wetting agents by fire fighters or others, and the use of self-contained pre-wetting systems could be an extremely valuable mitigation approach if applied correctly. This means a sufficient amount of a wetting agent needs to be applied at the right time to prevent ignition of fuels around structures and the structures themselves. Such systems could protect structures even without the presence of firefighters and could serve as an additional mitigation measure if the landscaping is overgrown.

The goal of this project is to reduce firefighters’ fatalities and injuries in UWI fires by providing a scientific basis for the optimal implementation of pre-wetting systems. The goal was achieved through systematic examination of the performance and effectiveness of three categories of wetting agents (water, foam, and gel) for UWI fire prevention, and developing engineering information and tools (including testing method and educational materials) for optically implementing wetting agents for UWI fire conditions. Specific objectives of this project are set to accomplish the following:

1. Develop a database describing the performance of water stressed live landscaping plants, dead fuels (dead grass and other vegetation), and building elements when wetted with water, foam, and gel at various times before firefront arrival at various weather conditions and exposed to UWI fire conditions as determined by various wildland vegetation fuels and their distances to landscaping plants and structures.  The database will be used to develop engineering correlations that can be used to design wetting and extinguishing procedures and systems for preventing UWI fires from spreading to and igniting structures.
2. Develop a test method for the evaluation of the effectiveness of wetting agents applied to various landscaping plants and building assemblies, and initiate its standardization in ASTM.

3. Develop an educational module related to the use of wetting agents for UWI fire protection for fire service personnel, home owners and general public education.

The outcomes from this project are a database of performance and effectiveness of three types of wetting agents (water, foam and gel) in various WUI circumstances, a standard proposal to ASTM, and an educational module for fire service personnel and the general public.