In this Theory section, the history, background, and modern innovations of various types of electronic control devices will be discussed.

Originally, joysticks were developed as a method of steering and controlling aircraft. The Oxford English Dictionary states that one of the first mentions of the word “joystick” was back in 1910 by Robert Loraine in a diary. While there exists competing claims of the origin of the word itself, it is agreed upon that those who coined the term “joystick” were not inventors of the device. Joysticks were originally mechanical control columns, used to control the elevators and ailerons of an aircraft. The first electrical joystick was patented by C.B. Mirick at the US Naval Research Laboratory in 1926. According to “A Timeline of NRL’s Autonomous Systems Research”, the device was developed for “remote radio control of pilotless aircraft or any circuits or objects which are to be controlled at a distance”. 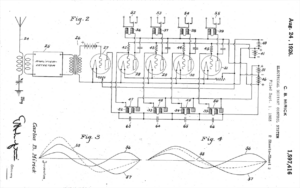 Early joysticks were simply a combination of four switches for each cardinal direction. As the joystick moved in a direction, a conductive piece of metal would make contact with the circuit board and complete the circuit, activating a signal. Joysticks with this type of switch behavior were referred to as digital joysticks (Lu 2003). A basic circuit diagram for a digital joystick is shown in the figure below. 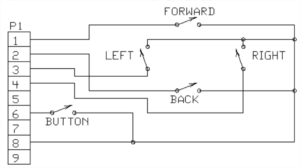 Joysticks have been first documented to be used with a video game by Ralph Baer in 1967. The joysticks were used as controllers, and they controlled the two dimensional motion of dots on the screen. The first joystick that contained a central shaft and pivotal point is credited and was patented by Stephen D. Bristow in 1978. This joystick belonged to the Atari 2600 “Video Computer System” as an alternative controller to use for the infamous Pong video game. Since then, joystick controllers have evolved to include buttons, rumble feedback, and miniature joysticks on the side for use in things such as flight simulators. Advanced joysticks are used to control mobile machines with two axes of motion. An example of a modern joystick is the Logitech G X52 Professional, which is a joystick controller used for flight simulation and includes a secondary throttle joystick as well. An image of it is shown in the figure below: 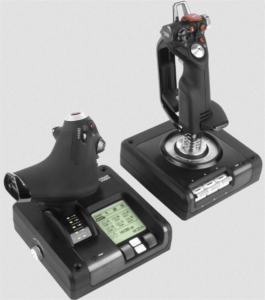 Electrical push buttons are a widely used technology. Buttons are used by people to interact with a multitude of electronic devices, such as controlling the volume on your phone, turning on a microwave, and speeding up or slowing down in a car with a pedal. While the origins of the push button are essentially impossible to determine, some believe the push button’s origin can be traced back to pianos used in the sixteenth century (Plotnick 2012). The action of pressing a button can be attributed to playing a musical instrument, typing on a typewriter, or using a telegraph.

One of the most basic uses of a button in an electrical circuit is the completion of continuity. When a button is pressed, it can either complete a circuit and the circuit will be energized, or if the circuit is typically on, can break the circuit while the button is held. This functionality is very similar to a switch, which instead holds its state until physically switched back to another state. Essentially, buttons provide a digital signal to a system — a 0 or 1.

These buttons are typically made very small, and are meant to be difficult to accidentally press:

These buttons are normally made very obvious and easy to press in the case of out of control situations concerning machinery:

These buttons are normally made just smaller than a typical adult’s finger, easy to activate rapidly, and are round in shape: 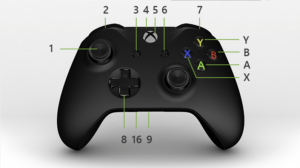 Handheld controllers can have their origins tied back to one of the first video games ever developed, Spacewar. Spacewar was a two-player game, where each player gave commands to their spaceships to move, fire at their enemy, and dodge attacks. Originally, each player controlled their ship by a handful of switches on the computer itself, however the screen of the computer it was being played on was on one side of the switches. Other issues included non-ergonomic switch positions, risk of damaging equipment, and lack of labeled switches. In an effort to solve all of these problems, a “control box” was developed.

The first “control box” utilized two double-throw switches for movement control and a button for firing a missle. This first controller then underwent a couple design changes, and MIT developed a model that positioned the switch that controlled ship rotation horizontally and the switch that controlled acceleration vertically. Now, with personal controllers, the two players could separate themselves to create a more enjoyable experience. A sketch of an original control box is shown in the figure below. 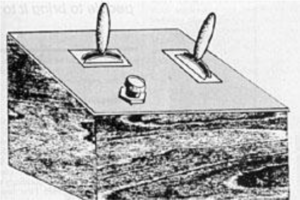 Modern controllers, from an electrical point of view, are a combination of digital buttons and analog sticks. Take, for example, the Xbox controller shown in Figure ___. The controller contains two trigger buttons and two bumper buttons on the back, four round buttons with letters on the right, a directional pad (containing four buttons underneath) on the bottom left, three buttons in the center, and two analog sticks on the top left and bottom right. The buttons act as described in the Buttons section above, but the analog sticks send an analog signal from the user to the device. Analog sticks normally utilize potentiometer sensors to detect position, and in the case of the Xbox controller, they are typically used to control movement on one stick and rotation on another. In the context of a robot, one analog stick could be used to control the forward and backward movement of the motors while another could rotate the robot as a whole.

The modern keyboard, in the context of electronics, is a collection of switches commonly used to input letters and numbers into a computer. The dictionary definition of a switch is a “device for making, breaking, or changing the connections in an electrical circuit.”

The origin of the modern keyboard can be dated back to the invention of the typewriter. The typewriter was invented to increase the speed at which someone could write a message. Early typewriter-like machines were very large in size and inconvenient to use, often being slower than handwriting a note. In 1867, Christopher Latham Sholes set out to create a practical typewriter. After a couple prototypes, Sholes partnered with E. Remington and Sons to manufacture his typewriters, and in 1874, the “Remington” hit the market. The “shift” key was later introduced to the typewriter and was available in models after 1878. 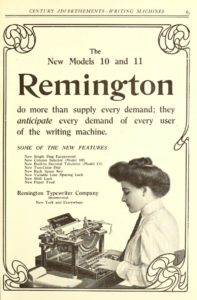 Modern keyboards operate by pressing individual keys, which activate a corresponding switch. All keyboards have an array of keys and a circuit board that houses a processor and a small amount of memory. There are many different styles of key switches, but they operate in the same general manner: the switch completes a circuit and passes current through, which tells the keyboard processor that a key has been pressed. The processor then checks a character map stored in the keyboard memory to determine what character it corresponds to.

Keyboards are used in a variety of applications, but the most obvious and apparent application is typing words. Writing papers, sending emails, and even constructing this web page would not be possible without a keyboard. When considering electronics, keyboards are the main input device for humans to program machines. It is a safe assumption that keyboards are a vital peripheral of any sort of computer system.