Motors are a very common component in many systems. To function properly, their selection requires a careful step by step process that relies heavily on the intended operation of the motor. While designing your system, it is advantageous to begin with the end in mind. Therefore, before motor selection can begin, it is beneficial to define what the motor will have to do, the performance goals of the motor. Understanding these parameters will help the selection process by keeping the focus on what your system must achieve, and in turn can help you to better define motor technical requirements.  This page will help you focus on your design goals and quicken the process of purchasing the right motor from a catalogue. Start by defining the function of the motor and its performance requirements. 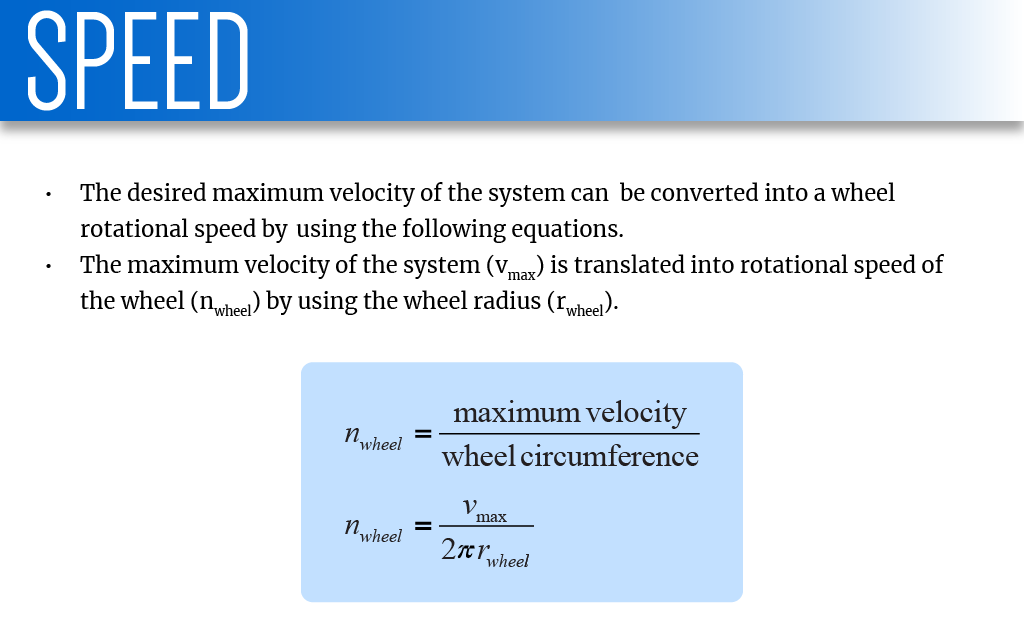 This calculated rotational speed is the desired operating wheel speed for the system.  However, when selecting a motor, motors’ data sheets give ratings for a “No-Load” speed (n0) or the maximum rotational speed of the motor with nothing attached to it, i.e. having “no-load.”  The motor you select will require a rated “No-Load” speed greater than your calculated operating speed because when a physical load is placed on the motor, the motor speed will naturally slow down.

Physical load on the motor can more accurately be stated as the amount of force required to maintain the target velocity (vmax) and achieve the target acceleration (amax). These forces will then need to be translated into a torque (T) requirement for the motor. Once a torque requirement and the desired operating wheel speed are known, you will have your initial mechanical requirements to begin identifying options for your motor.

The value of the torque requirement will be a little more difficult to accurately predict than the desired operating wheel speed.  During steady state constant velocity operation, the motor requires torque to overcome the friction in the system such as between motor bearings, gears or other contacting surfaces and any longitudinal component of the weight vector such as going up/down an incline.  Because of the difficulty of obtaining many of these values, some assumptions will be required to get the motor selection process started. 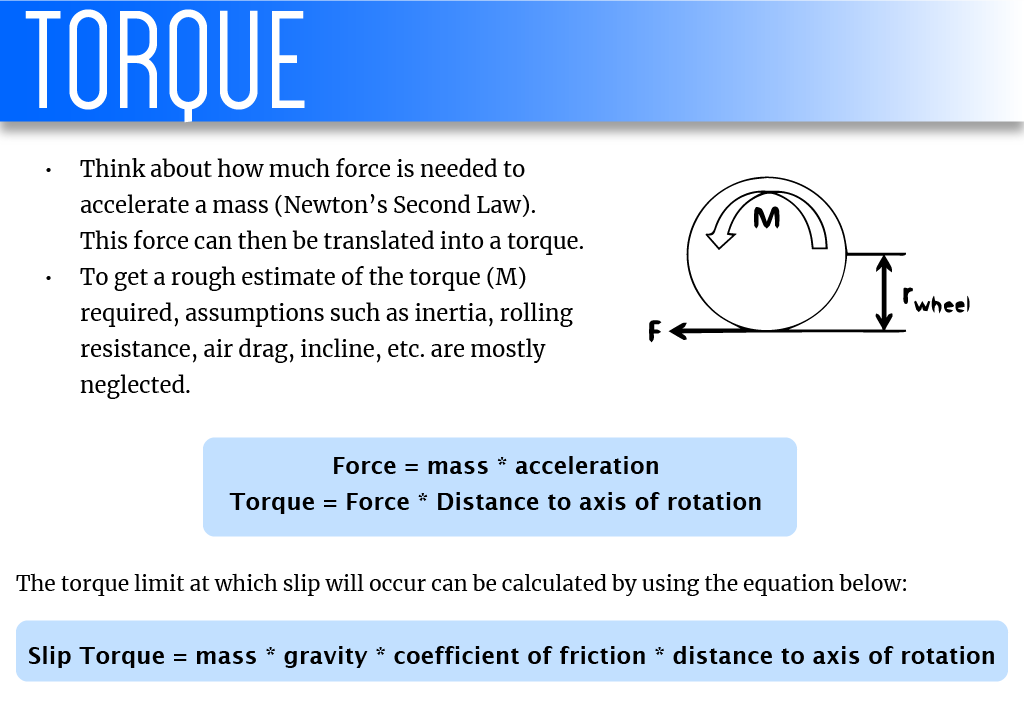 To understand torque, think about how much force is needed to accelerate a mass. We can find this using Newton’s Second Law. This force can then be translated into a torque. Let’s say that the mass of your system is 10 kg, and to accelerate it at 2 m/s2, a force of 20N is required.

Torque is the product of force and distance to the axis of rotation. Earlier we have assumed that a wheel of radius 5 cm is connected to your stepper motor. Then the torque required for the system to keep accelerating at 2 m/s2 is 1 Nm. Based on this result, the motor chosen should have a torque provided to the wheel greater than 1 Nm considering other factors such as friction and air resistance.

Before confirming the above calculated value as the target torque, it is important to understand the maximum torque that each wheel can transmit. This is known as the traction limited torque.  If the motor can produce more torque than the wheel can transmit, then the wheel will slip on the ground. To perform a quick check of the traction limits of wheels, the assumption will be made that there is no weight transfer due to acceleration. This is rarely true in practice, but a conservative estimate of the wheel’s coefficient of friction with the intended ground can help overcome the weakness in this approximation. The torque limit at which wheel slip will begin to occur can be calculated using the equation shown. In the example, the friction coefficient is taken as 0.6 which results in a traction torque of 2.95 Nm.

Since the maximum torque our system requires is 2.28 Nm and the slip torque occurs at 2.95 Nm, our system remains unaffected.

The speed and torque requirements you determined earlier are also used to determine a power requirement for your motor. All motors are only able to output a maximum amount of power denoted by Pmech, max. The power output from a motor can be utilized in mainly two (desired) ways: spinning its output shaft faster or spinning its output shaft with more torque. Hence, there is a trade-off between speed and torque in any motor’s operation as shown in the equations below. 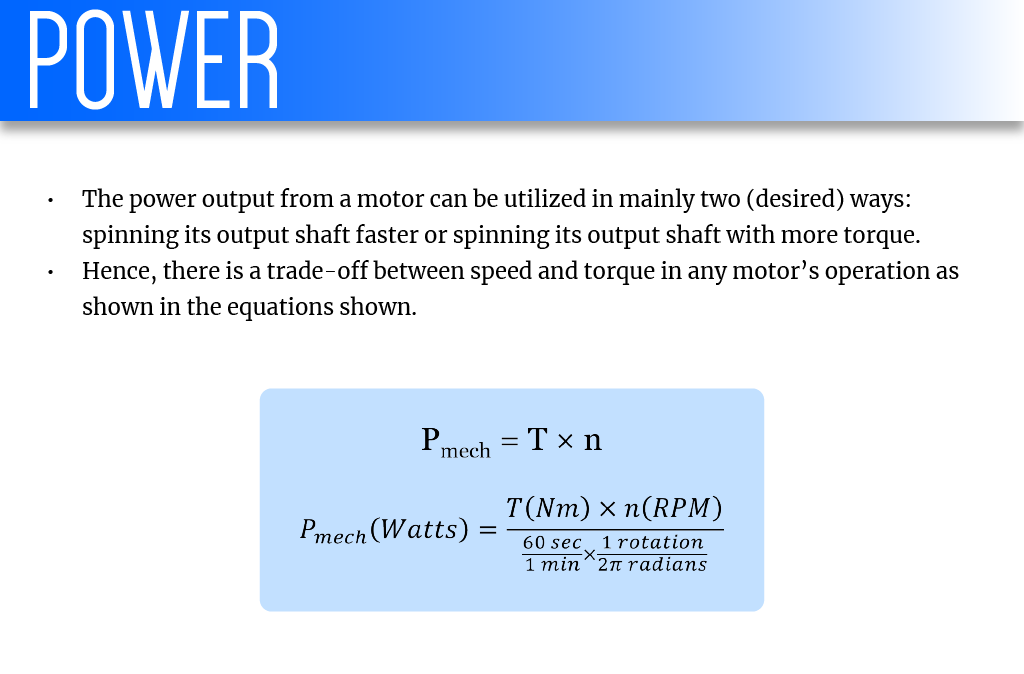 You can purchase stepper motors from the following places on the web: