I/O devices are used to transform inputs from outside sources into outputs that computers and/or machines can use. These controllers are connected to varying levels of inputs from simple mechanical inputs like switches to more complex inputs like thermistors and thermocouples or even other data collection devices.

Once these inputs were connected through to the various configured I/O channels, their data is collected and sent through varying degrees of logic gates and data to manipulate and interpret the data in a way that it can be delivered to, and read by, any possible machine or combination of machines. These machines then interpret the signals sent by the I/O units to perform their duties in settings such as production of goods. 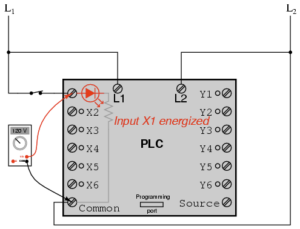 Figure 1: PLC diagram with input on the left, output on the right

I/O controllers often make use of programmable logic controllers (PLCs). PLCs utilize ladder logic programming to simulate a physical system that would take inputs and run them through entire arrays of contacts, coils, timers, and counters to deliver an output to the rest of the system. As seen in the example of PLC ladder logic below, even something as simple as a single mechanical button press can kickstart an entire array of machines if the proper I/O device is used to distribute inputs correctly. 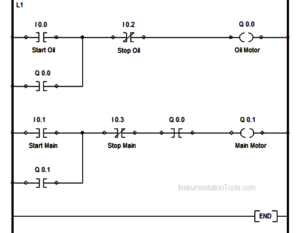 To learn more about PLC and logic control in general, please visit it the dedicated PLC page here or the Motion and Logic Controllers page here.

When discussing I/O, the there are two types of input signals: analog and digital. Analog inputs are inputs that vary in their signal strength and duration. These inputs could be represented by input devices such as thermocouples and Resistance Temperature Detectors, all of which depend on varying levels of input in order to send the signal through the I/O controller. A thermocouple can be seen below:

The advantage of these devices is that they can be adjusted easily and can be set to have varying thresholds with which varying inputs can be assigned. With a thermocouple for example, one could assign three different thresholds. One could be assigned at 200°F to start a process and run at half power until another assigned threshold at 750°F kicks it to full power, and then can have an emergency shutoff threshold set at 1500°F.

As opposed to analog inputs, digital inputs may be the preferred method of input. If a process does not rely on a variable input, then a digital input would be sufficient. These inputs rely solely on a simple on/off style input. Examples of these would be switches, breakers, levers, etc, that when in one position yields no input, but when in the second position, provides full input. An example of a digital input in a circuit can be seen below: 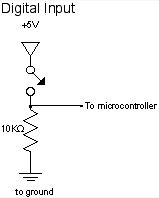 In circuits like the one seen above, a simple gate-switch can be used to provide either the full five volt flow in the closed position, or zero voltage in the open position. These styles of inputs are generally accepted as being more precise than analog inputs, even if they are generally more simple in their designs.

Output signals are equally as important as input signals when discussing I/O. If there is an input, there needs to be an output. Direct Digital Output is similar to their input counterparts in that the outputs are based on a binary system and are treated as either on or off. They are either producing a signal or not. These types of outputs can be viewed in devices such as relays, indicator lights, or valves. This can be seen below in this simple relay switch. 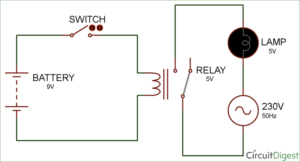 Modulated Digital Outputs are the standard digital outputs, but instead of the typical square waveform, it utilizes a sinusoidal waveform, and then variables like period, wavelength, and frequency are modified to fit a necessary wave pattern. Examples of digital output modulation can be seen in the figure below. 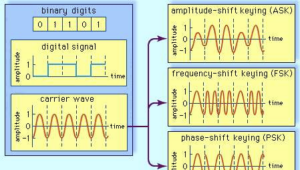 Analog outputs are just like their input counterparts, the strength and duration of the output signal varies. These outputs are useful when a non-binary result is needed. For example, if a sensor needs to know how close an object is, a digital output would be insufficient as it would only read whether the object was within range or not. An analog output would tell just how close or far the actual object is. Examples of analog output devices include pressure scales, thermometers, and altimeters. All of these have variable readouts depending on the state of their input variables. 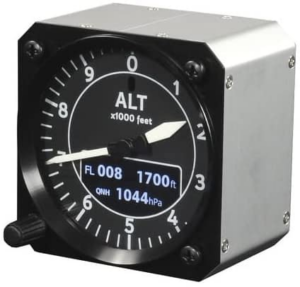 There are two types of data transmission paths: serial and parallel. Serial Data transmission is the simpler way to transmit data. Data is transmitted one bit at a time when transmitted serially. Serial transmission is sometimes preferred as it is more often than not less expensive to implement, and yields a smaller footprint. Cables like USB and CAT-6 Ethernet are very common for use of serial communication. 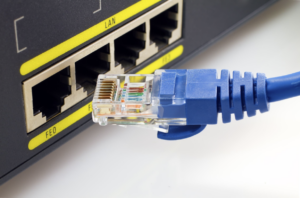