Let T T be the common tangent and MN be the common normal to the curves at the point of contact Q. From the centres O1 and O2, draw O1M and O2N perpendicular to MN. A little consideration will show that the point Q moves in the direction QC, when considered as a point on wheel 1, and in the direction QD when considered as a point on wheel 2.

Let v1 and v2 be the velocities of the point Q on the wheels 1 and 2 respectively. If the teeth are to remain in contact, then the components of these velocities along the common normal MN must be equal. 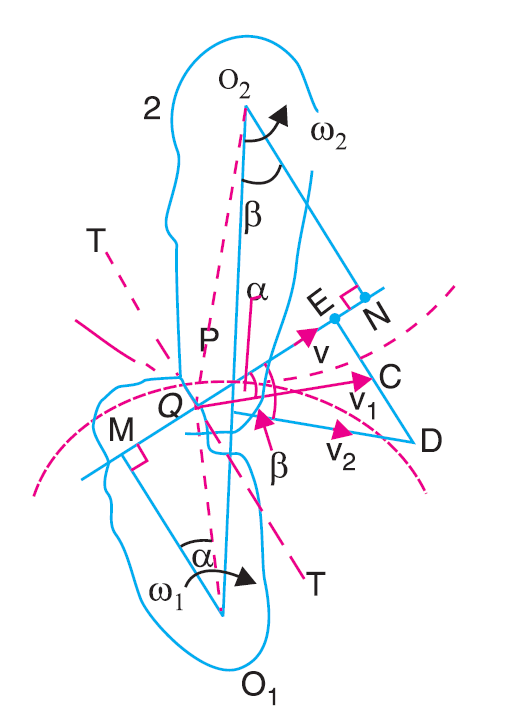 Combining equations we have

Therefore in order to have a constant angular velocity ratio for all positions of the wheels, the point P must be the fixed point (called pitch point) for the two wheels. In other words, the common normal at the point of contact between a pair of teeth must always pass through the pitch point. This is the fundamental condition which must be satisfied while designing the profiles for the teeth of gear wheels. It is also known as law of gearing.

Velocity of Sliding of Teeth

The velocity of point Q, considered as a point on wheel 1, along the common tangent T T is represented by EC. From similar triangles QEC and O1MQ,

Similarly, the velocity of point Q, considered as a point on wheel 2, along the common tangent T T is represented by ED. From similar triangles QCD and O2NQ,

Let vs = Velocity of sliding at Q.

For curious minds, here’s an excellent video explaining how a gearbox works: