As a result of being a widespread and highly implemented technology, motion and logic control systems have a lot to consider when making a product selection. As an aid to making a sound decision, the differences between various controller types are explored below.

As described on the dedicated PLC page, as well as the product theory page, programmable logic controllers are a basic, go-to solution for many logic control needs. PLCs were designed to be a replacement for all of the electrical relays, switches, and wires used to previously control a system, and be a cost and space efficient alternative. PLCs, by design, are easier to program, troubleshoot, and service by programmers and technicians alike because of their simplicity, however, this leads to limited processing power and overall capacity. In the context of motion control, PLCs are perfect for performing and managing single-axis motion, light calculations, and data handling. An example of this could be a conveyor belt on an assembly line, and the PLC could control the speed and direction of the belt depending on the amount of items on it. Any more complex tasks are better suited for more advanced technology, such as PACs or IPCs. A block diagram of a basic PLC system is shown in the picture below: 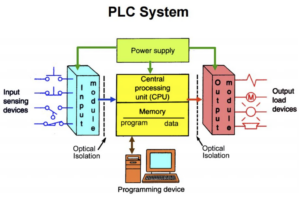 A programmable automation controller can be thought of as a PLC with the processing power of a personal computer. Some PLCs nowadays are becoming more and more advanced, so the line between PAC and PLC is blurred. However, the two defining characteristics of a PAC that separate it from a PLC are the modularity and open architecture of the PAC. By design, PACs have higher computing, memory, and I/O capabilities, and can more easily interact with other controllers to serve larger applications and systems. PACs can also be programmed the same way as PLCs, or be programmed in a typical computer language such as C++. These advantages make PACs better suited for complex applications that require numerous subsystems be monitored, for example, a factory floor with multiple assembly lines and specialty robots collaborating to produce parts. One example of a PAC is shown in the picture below: 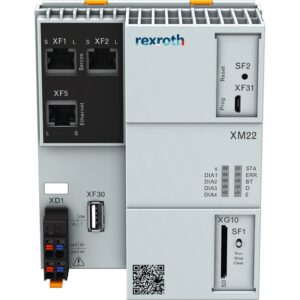 Industrial PCs (IPCs) are exactly what the name suggests: PCs that are specialized for an industrial environment. They are essentially normal computers, running an operating system like Windows, but built with components that are meant to withstand a harsh environment such as a factory floor. However, due to the nature of an operating system such as Windows, sometimes an IPC needs to have a second real-time operating system to help it perform complex tasks such as coordinated motion.

IPCs have the largest memory and processing capability between them, PLCs, and PACs. One common application of IPCs is an imaging system where an abundance of data is collected at a rapid rate. IPCs can also be integrated into larger systems where they can take on a supervisory role for an entire operation. One example of an IPC is shown in the picture below: 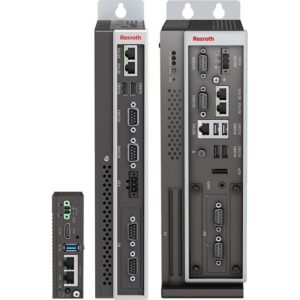 The device shown in the picture is a Box PC from the Bosch Rexroth PR series. This Industrial PC in particular is meant to be mounted in a cabinet setting, and comes with multiple operating system options. These devices are highly expandable through their expansion slots and require a display to operate.