A servo motor is a motor utilizing an automatic control system to change the position of an object (An Introduction to Servo Motors). Servo is short for servomechanism which utilizes an input command, power amplification, feedback, and lastly an output. The output of the servo motor is what turns the desired object. There are many different categories and subcategories  of servo motors that are made for different applications such as DC servos, AC servos, Brushless DC, Position rotation servos, continuous rotation servos, and Linear servos (Goel, 2018).

DC servo motors are made similarly to traditional electromagnet motors but operate differently in most aspects. DC servos are less efficient than traditional motors so they are larger in size for similar power outputs. There are different types of DC servos for different applications such as series, split series, shunt control, and permanent magnet shunt servo motors.

AC servo motors utilize the applications of encoders for feedback in a closed loop allowing them to be highly accurate in positioning.

Brushless DC motors are similar to DC motors in that they use DC electricity but they differ in that they can switch  power supplies providing AC current to drive the motors individual phases in a closed loop. These motors feature a great power to weight ratio and can achieve high speeds and be utilized well from electronic control. Typical applications include power tools, computers and even applications in some vehicles.

Continuous rotation servo motors are similar to positional rotation but they have the ability to rotate in either direction an unlimited amount. The direction of rotation can be changed by changing the command signal. Common applications include robots and rotating radar dishes.

Although there are many different types of servo motors the main parts are the same consisting of a motor, reducing gears, and the circuity to control the motor. Shown in Figure 1 is an example of a typical servo motors internals. 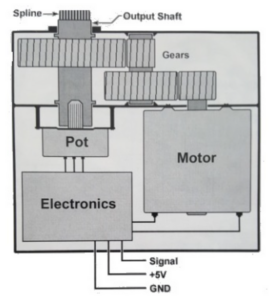 Figure 1: Inside of a Servo Motor

In a servo motor the motor is activated by the electronics via electrical pulses. The electrical pulses decide the angle at which the motor turns. In the example in Figure 2 it can be observed that as the pulse width increases so does the rotation of the motor. 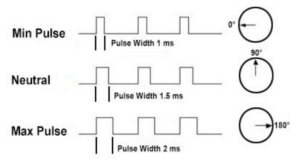 Figure 2: Servo Motor Degrees of Rotation based on Pulse Width