Bosch Rexroth offers four separate series of I/O system devices. Each series of product have similar function, but have varying levels of connectivity and protection:

Bosch Rexroth advertises two series of I/O products for use in a control cabinet: the S20 series and the Inline series. Both boast IP20 rated protection, are compact, modular, and have simple designs. Both are meant to be mounted on a 35mm DIN rail and have modularity between other devices in their series. 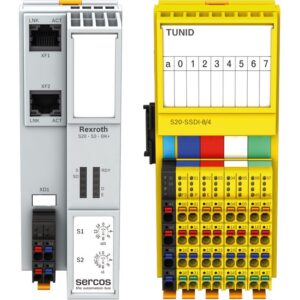 The S20 series, originally released in 2014, differentiates itself from the Inline series by offering local Bosch Rexroth XM control technology. The devices themselves also have a different style of housing, with a nameplate to help the installer organize their wiring. There are many types of devices available in the S20 family, such as the following: 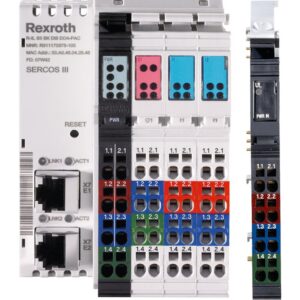 Released initially in 2006, the Inline series is different from the S20 series by mounting as the name would suggest — inline with other nearby modules. The modules themselves are skinnier in width and connect flat against each other allowing for more space available in the mounting cabinet. The Inline series also has the option to utilize Bosch Rexroth CML control technology. Similarly to the S20 , the Inline series offers many types of devices:

Bosch Rexroth offers two separate series of I/O devices for direct installation into extreme industrial environments: the S67E and Fieldline series. These I/O systems for field installation are “designed for distributed automation tasks in harsh environments”. Both advertise similar capabilities, with both being capable of IP67 protection and providing direct connection to sensors and actuators. The main difference between the two is that the S67E series is much newer, being released in 2020, whereas the Fieldline series was introduced in 2010. 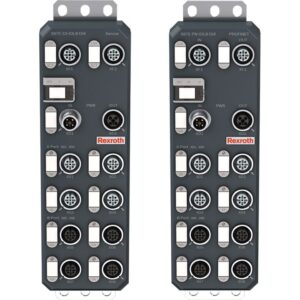 The S67E series utilizes the IO-Link system, which is the first globally standardized IO technology to communicate with sensors and actuators. The IO-Link system itself involves the following five components at a minimum: 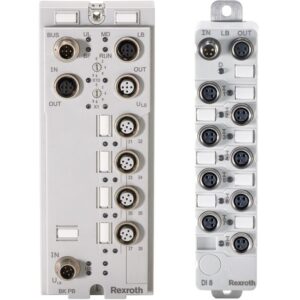 If this is a product that can be useful for your Senior Design Project, please contact a Bosch Rexroth representative here for more information. Pricing can be determined on a case-by-case basis.