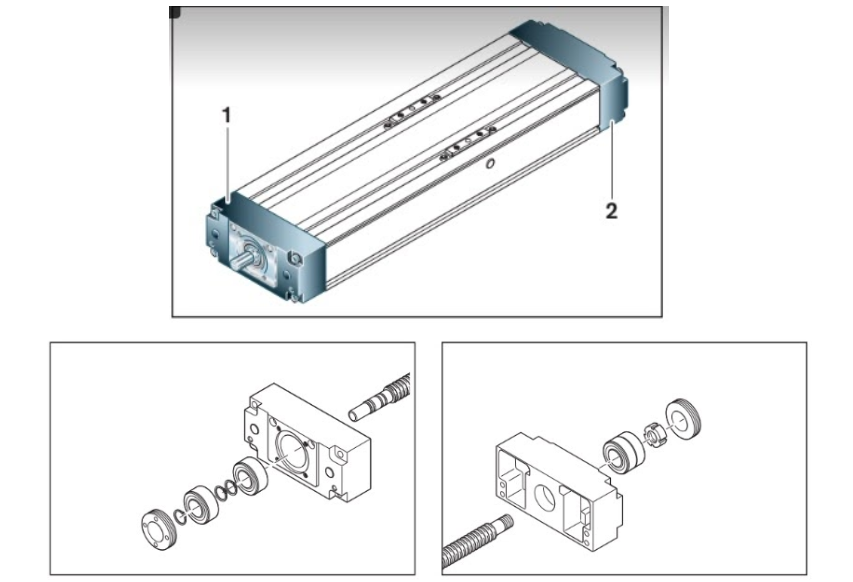 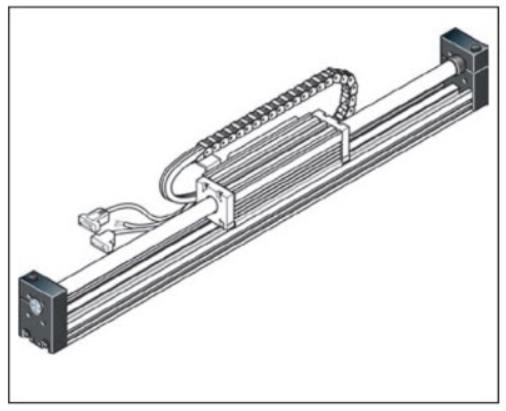 The end blocks that come with linear motors serve as both end covers for the frame and as stops to prevent the carriage from overshooting. Unlike end blocks for toothed belt drives or ball screw drives, these end blocks do not have a shaft, as the thrust for the carriage is directly generated at the carriage. 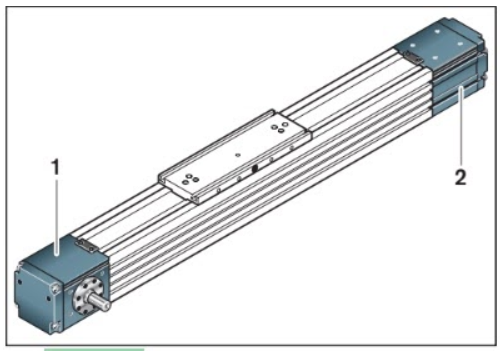 Gear Units are special types of gearing, and thus are able to adjust the torque and speed of the linear motion system. Bosch Rexroth has two types of gear units: timing belt side drives and planetary gears. The planetary gear units attach to the side of the system, while the timing side belt drive attaches underneath. For either type, a locating feature and a fastening thread are provided in order to attach the motor or gear unit.

If a timing side belt drive is used, then the overall length of a system may be reduced compared to one with a direct motor attachment.

Bosch provides the user with their own motors, which come pre-assembled with a motor housing.

If the user wants a different motor than what Bosch provides, then they would need to fill out a separate form in order to have a housing made special for the motor. Bosch sells these three types of motors: servo motors, stepper motors, and three phase motors. The following details the pros and cons with each of the three types of motors that Bosch Rexroth provides:

Another type of electrical accessory that comes with most linear motion systems is switches. As explained in the Structure of Linear Motion Systems, switches come in two forms: Limit Switches and Reference Switches. Bosch Rexroth sells two types of limit switches: Mechanical Switches and Reed Switches; and two types of reference switches: proximity switches and hall sensors. The below details the working process between each of the different types of switches. 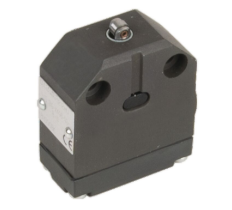 The mechanical switches that Bosch provides are roller limit switches. Linear Motion Systems with these types of switches installed include a side cam. As the cam rolls over the switch, the switch opens the current which stops the carriage.

The benefits of using this switch instead of others is that it is less likely to cause interference with other types of sensors. However, the accuracy of the switch is lowered as the speed of the carriage is increased. For the mechanical switch, it is recommended not to approach the switch at a speed greater than 1 m/s.

Both Hall Sensors and Reed Switches are sensors that detect the presence of a magnetic field. Linear Motion Systems with either type of sensor comes equipped with a magnet attached to the carriage.

The main principle behind a hall sensor is the Hall Effect; when a magnet passes over a semiconductor that has current flowing through it, the Lorentz force pushes negative charge to one end on the material. The excess of negative charge on one end pushes positive charges to the other end. This creates a voltage across the semiconductor that is proportional to the strength of the magnetic field passing through the material. Since the strength of a magnetic field is dependent upon the material’s distance from the magnet, the hall sensor can detect the distance of the carriage from the sensor.